NFPA’s 8th annual Fire Prevention Week campaign with Domino’s officially kicked off yesterday at the Detroit Fire Department’s Fire Engine 27, where 75 second graders from Detroit’s Mayberry Elementary School were treated to fire safety lessons supporting this year’s theme, “Hear the Beep Where You Sleep: Every Bedroom Needs a Working Smoke Alarm”, along with a visit from Sparky the Fire Dog® and a pizza party. The event culminated in a send-off of the Detroit Fire Department and Domino’s, who made the first smoke alarm check and pizza delivery to a local family.

The festivities received quite a bit of local media attention, too, including live interviews with Detroit’s FOX news affiliate throughout the morning.

As a quick reminder, here’s how the campaign works: Customers who order from participating Domino’s stores during Fire Prevention Week will be randomly selected to have their delivery arrive from the local fire aboard a fire engine. If the smoke alarms in the home are working, the pizza is free. If they’re not working, the firefighters will replace the batteries or install fully-functioning alarms. 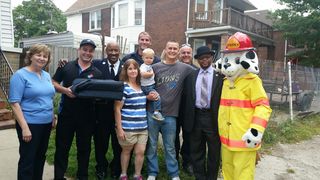 A huge thanks to all the fire departments that work with local Domino’s to locally implement the campaign each year. It’s a fun, engaging way to educate residents about smoke alarm safety and make families safer from fire, and we truly appreciate your participation!