Fire Services Training Institute is pleased to announce Chief Randy R. Bruegman has been awarded the 2017 Howard W. Rayon Distinguished Service Award for his distinguished service, commitment and dedication in the highest honor of the American fire service. 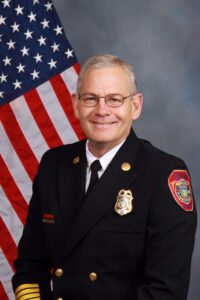 Chief Bruegman has served as a fire chief for 25 years with the past six years as chief of Anaheim Fire & Res-cue. Chief Bruegman’ s team developed Anaheim’s first community based Strategic Plan and Standards of Cover serving as the agency’s roadmap for the next five years. In 2014, the department received accreditation from the Commission on Fire Accreditation International; an achievement attained by less than one percent of the 30,000 international fire agencies. The department is also rated as an ISO Class 1 agency joining a select group of 178 cities nationally and 19 in California and is only one of 46 agencies nationally that have achieved both prestigious recognitions.

Chief Bruegman is a noted author and lecturer on leadership and managing change in fire service delivery.

The first FSTI Distinguished Service Award was presented during opening ceremonies of the 2009 California State Firefighters’ Association 87th Annual Conference in Sacramento to Chief Howard W. Rayon. A resolution was then presented naming the award in honor of his tremendous contributions, leadership, lifetime of achievements and dedication to the fire service. Howard was a significant influence in the development of FSTI and served as corporate secretary until his death on 19 October 2009.